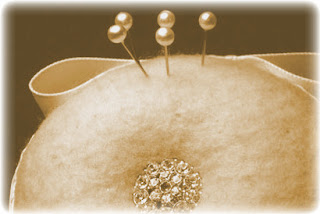 I have always loved Pincushions and without realizing it I have been collecting them for some time!
I now have a nice little collection from vintage to new and ones that I have designed and made.

Some of my crocheted and silk vintage pincushions
As early as the 1300's pins were carried around in a pouch. Metal pins were very costly and hard to find. So a special container was important! During the 1400's carriers came into fashion.

These early pins carriers were made of ivory, bone, or silver. At the time names such as pin keeper, pin case, pin poppet, and tuffet were popular.

At the beginning of the 1700's pin-pillows came into use. Usually delicately embroidered and made from finer fabrics such as linen, canvas, or satin. Hanging ball pincushions were found in many parlors. Soon pin pillows evolved into mounted cushions. Silver or wooden stands were topped with these cushions. 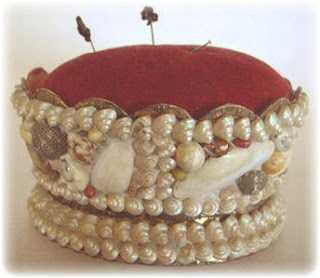 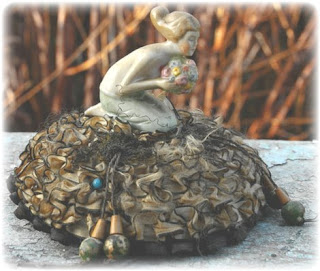 Pincushions from the 1600's through the 1800's pincushions were most popular and were more decorative. On some the pins were the decoration.
At this time pincushions came in the forms of eggcups, baskets, china, metal, and glass. 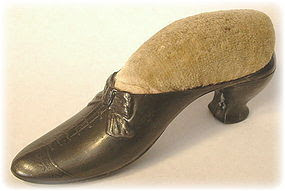 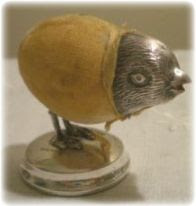 During the early 1900's pincushions became useful sewing aids. Clamp pincushions were decorative and functional. They would be screwed onto a table edge and also would help hold fabric in place.

One of the most well recognized is the tomato. People believed that placing a tomato in the entree area of their home would bring prosperity . Since tomatoes, at that time, were not available year round, people would make red balls of fabric stuffed with straw or sawdust. These would eventually be used as pincushions! 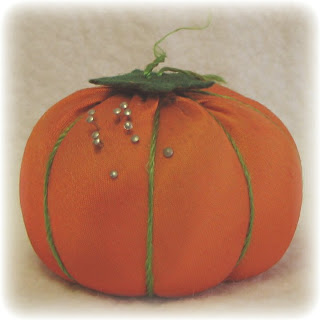 My silk vintage tomato pincushion with steel pins-
more orange than red!
In today's world, pincushions play an important part of our sewing history and a collectible that comes in many, many forms!

more about Pincushions to come in near future ...
Posted by Leslie O'Leary at 7:00 AM