Legend of the Luo River Goddess

I recently came across this Chinese legend of the Luo River Goddess. I love this legend and wanted to share it with you! From the information I can glean, it seems that there was indeed an Empress Luo Zhen...her life was all things that drama is of today. Please read this link for more information on the real Luo River Goddess. 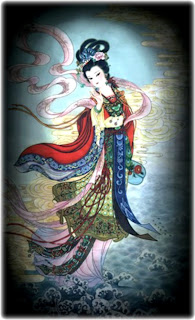 Lady Mi was the daughter of FuXi, the legendary Chinese emperor deemed to be the mythical creator of fishing, trapping, and writing. Because she was very fascinated with the beautiful scenery on both sides of the Luo River, Lady Mi descended onto the Luo River basin where the brave YouLou clan resided. There she mingled among the industrious folks and taught them how to create nets, fish as well as the skills of hunting, livestock-raising and herding which were learned from her father. 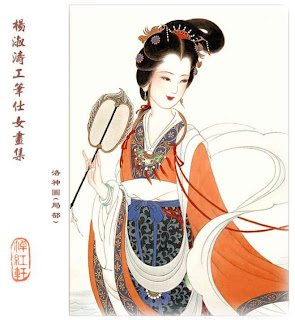 One day, while everyone was working, Lady Mi took out her seven-string qin, a Chinese musical instrument and played a melodious tune. Unfortunately, this exquisite melody was heard by HeBo, the prodigal demigod of the Yellow River. He infiltrated into the Luo River to get a glimpse of this qin player and was instantly mesmerized by the beauty of Lady Mi. He subsequently transformed himself into a white dragon, caused a great havoc in the Luo River and engulfed Lady Mi. 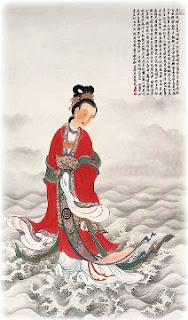 While Lady Mi was imprisoned in the water palace of HeBo, in order to drown her daily sorrow and anxiety, she strummed her seven-string qin. Her melodious tune attracted the lonely HouYi to her side. 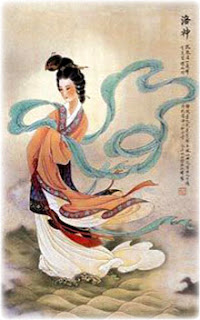 Upon hearing Lady Mi’s bitter encounter, HouYi was very indignant and rescued her from the water palace and returned to the Luo River. Both of them fell in love. On hearing that Lady Mi had escaped and that both of them became lovers, HeBo was so embarrassed with shame and anger that he again transformed himself into a white dragon and attacked the Luo River, gobbling up the villages, farms and livestock. 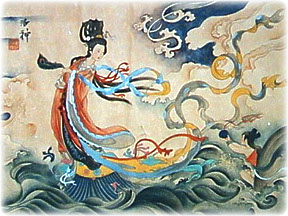 The furious HouYi came to the rescue and shot an arrow into HeBo’s left eye which sent the panicky HeBo fleeing. Knowing that he was no match for HouYi, HeBo went to lodge a complaint with the King of Heaven. The King of Heaven who knew about the whole saga, sided Hou Yi by telling that HouYi shot a dragon and that HeBo should not have transformed himself. HeBo got no choice but to retreat to his water palace and left both Lady Mi and HouYi alone. Since then, Lady Mi and HouYi led a happy live. For their contributions, HouYi was later conferred the title of God of ZhongBu by the King of Heaven and Lady Mi was conferred Goddess of Luo. Subsequently, the folks on both sides of the Luo River erected the grandiose Temple of Luo Goddess at the east gate of the old city.

Thus, the legend of LuoShen was passed down
from generation to generation.
This legend and story of Lou Zhen has been told in Opera of the Luo River Goddess 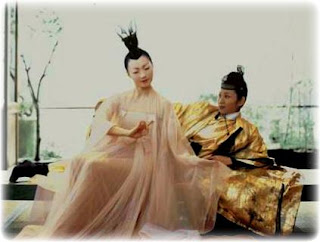 and even made into a Chinese television series which aired in 2002
Where the Legend Begins... 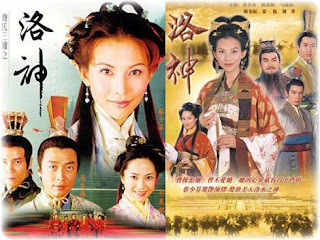