I was recently given these tiny Chinese Lotus Slippers by a very dear friend... 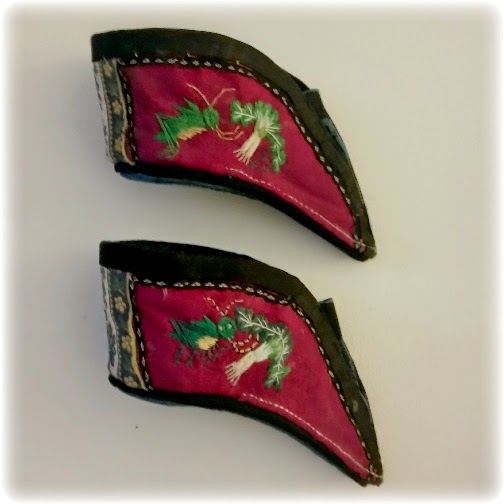 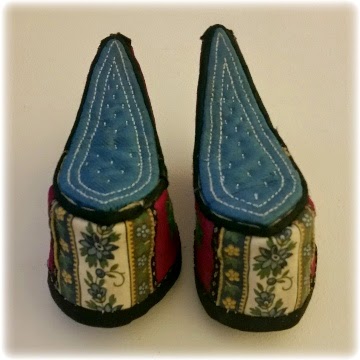 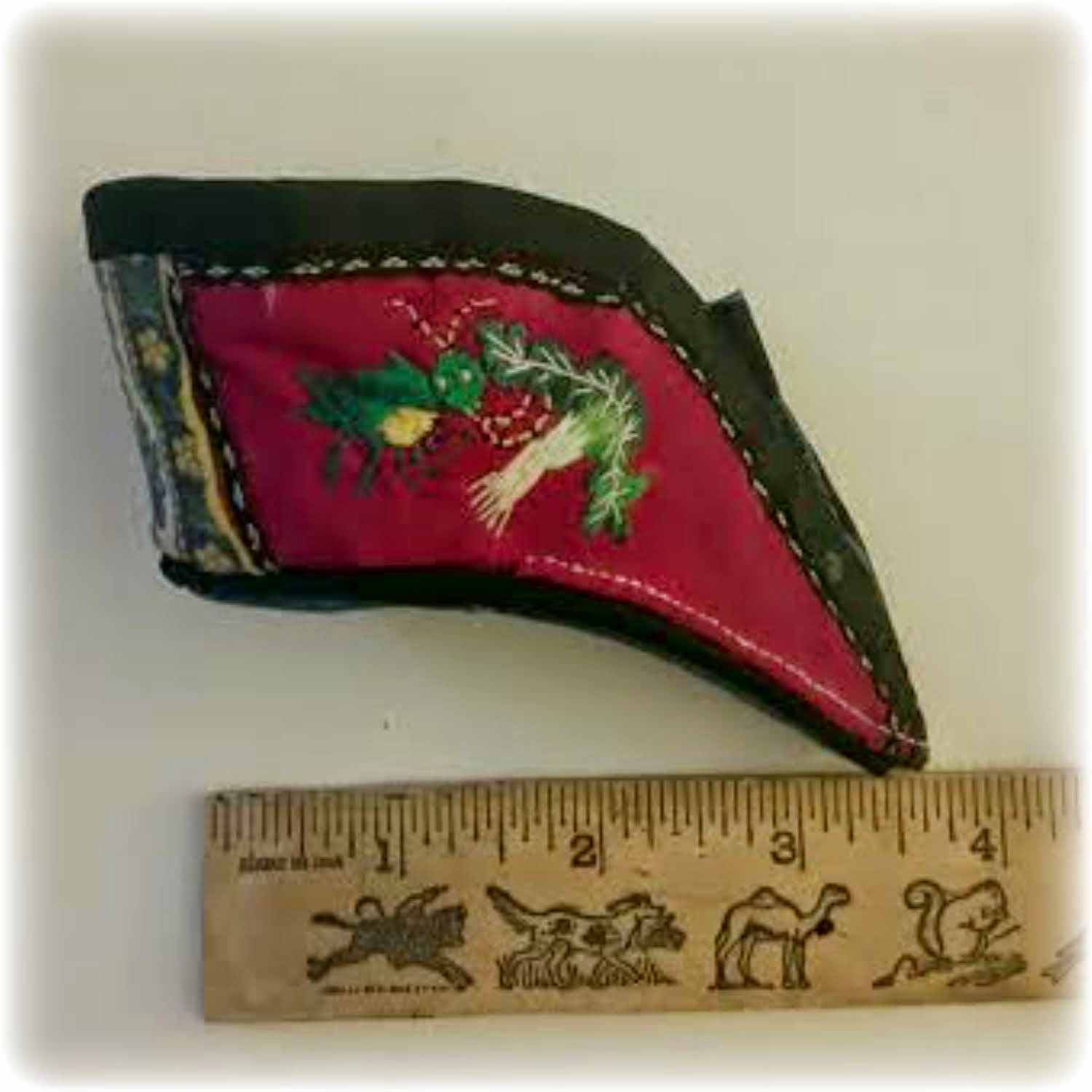 This prompted me to tell you from my humble knowledge about these shoes...I have studied mostly about the Chinese Children's Hats for over 15 years and feel that I'm just starting to understand them! The Chinese culture is varied and has much depth to it. You could spend a life-time on just one subject.

I believe in today's world we are very sensitive to the suffering of others. We care deeply for others and their welfare. I believe in a whole this is a wonderful thing...there is a carefully negotiated balance. Though with our deep caring this can bring judgement, which may cloud our understanding, especially of times that are now in our long ago history or our culture... 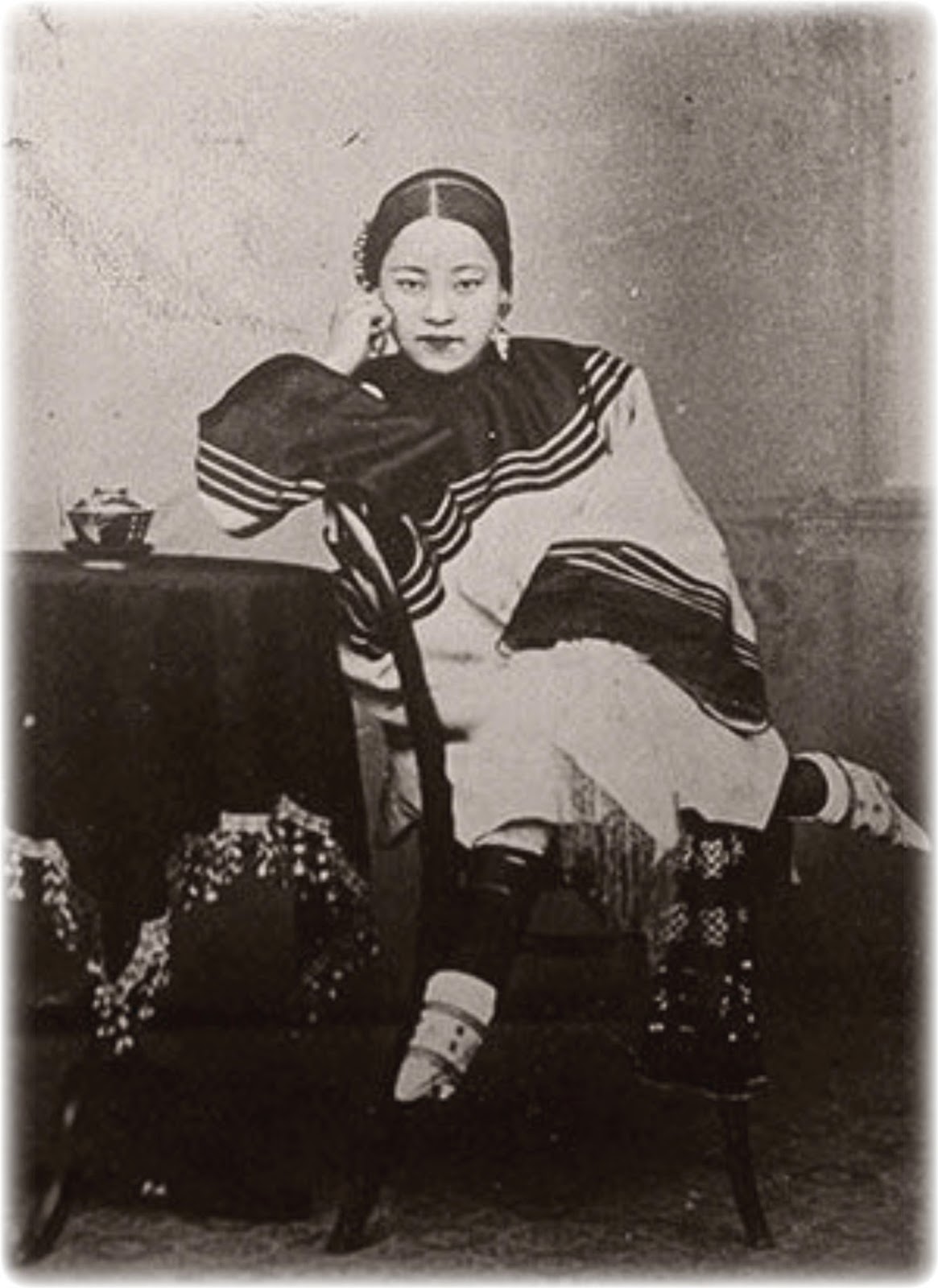 During this period, women did not have a voice and the only way to make their mark on the world was to marry well and through this bring honor to their family.

The generally accepted theory credits Prince Li Yu, who ruled one of ten kingdoms in southern China. It is said that he had a favourite woman in his concubine, who was a suburb dancer. “Precious Thing” toe danced inside a six-foot high platform shaped like a lotus flower made of gold. Chinese women resorted to permanent disfigurement in order to execute the choreography. When the women of the concubine started to bind their feet to copy Precious Thing, it is likely that the bindings were very loose in comparison to what they would become.

Lotus feet were a critical life demanding necessity among Chinese women (mostly Han) . This showed they did not need to work and was a symbol of aristocracy and wealth in a patriarchal society. Many families that were not of the aristocracy would groom their oldest daughter for this position in life. The custom was outlawed and finally followed through in 1912.

Women from wealthy and noble families focused their fine artistic creativity and energy on footwear for their tiny bound feet to race for uniqueness and beauty and distinguish themselves from others. 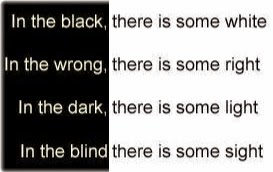 I believe we can look at the dark side of this custom that lasted for 1000 years!
We can also look at the beauty that contradicts from that period... 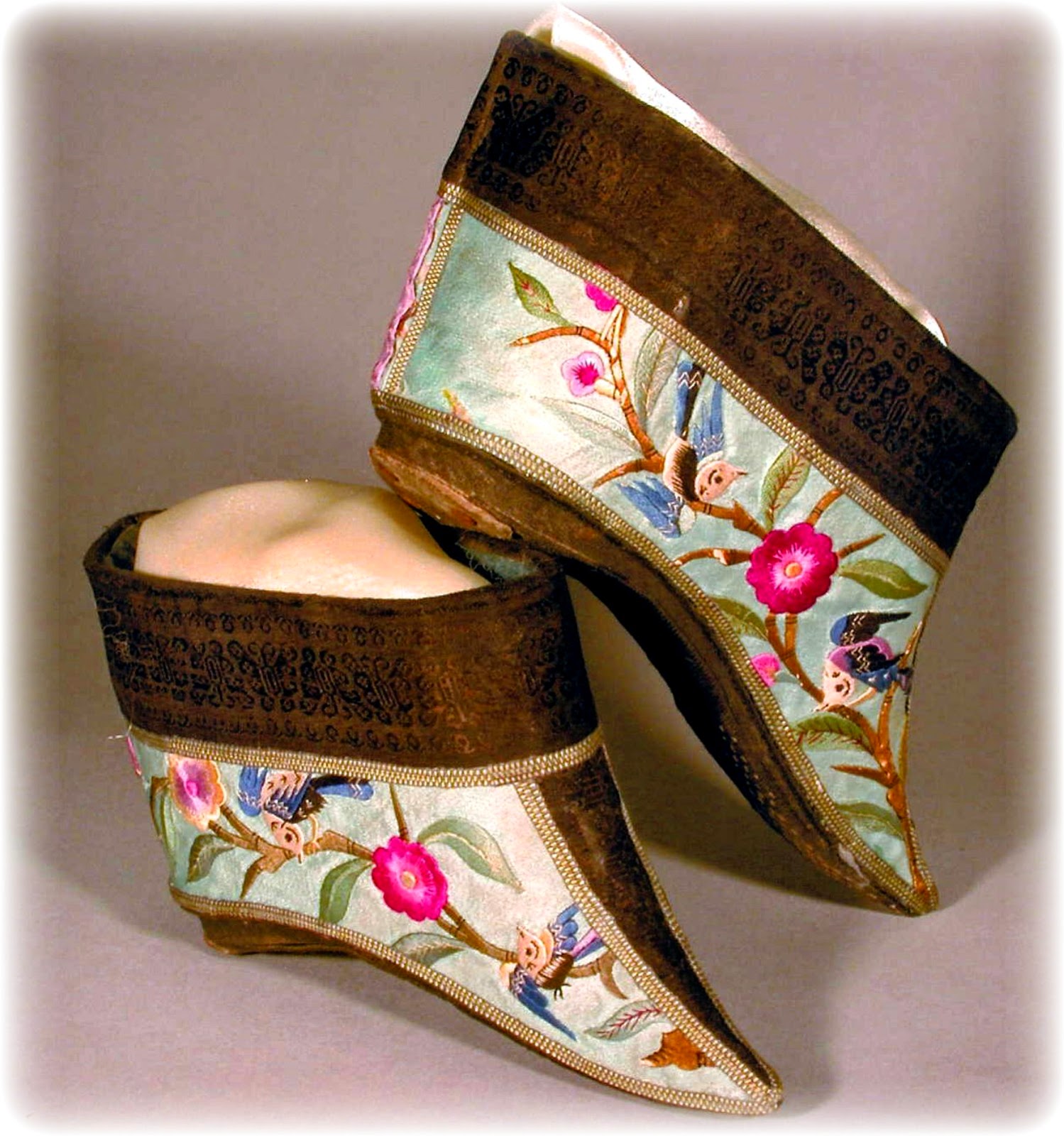 These very small little masterpieces were mostly made from silk, in the cities. In villages and poorer sections of the country, cotton was used because it was less expensive and more durable. 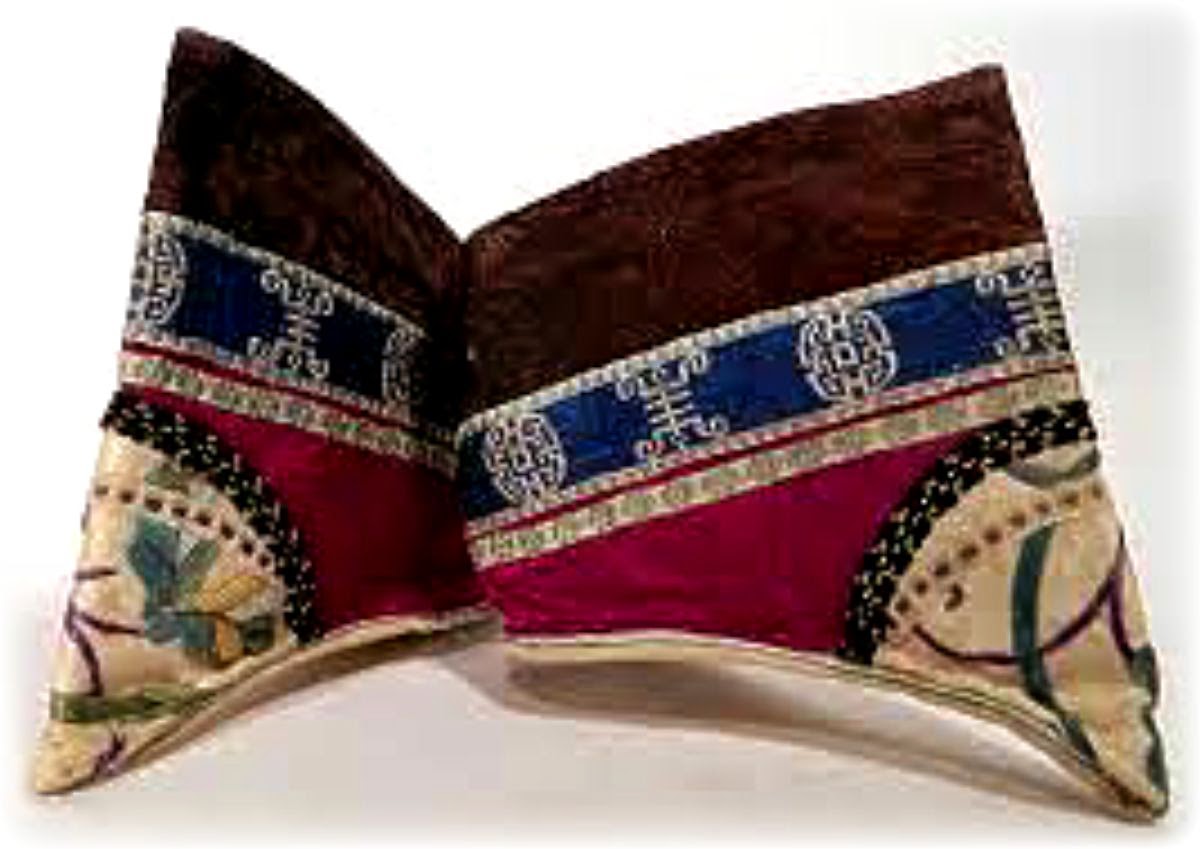 The embroidery on the shoes was hand sewn by the women who was to wear them, though younger girls often enlisted the help of mothers and sisters. Commercial patterns were available, but many women made up their own designs, specific to region and personality. This was the only time in a Chinese woman’s life where creativity was encouraged. 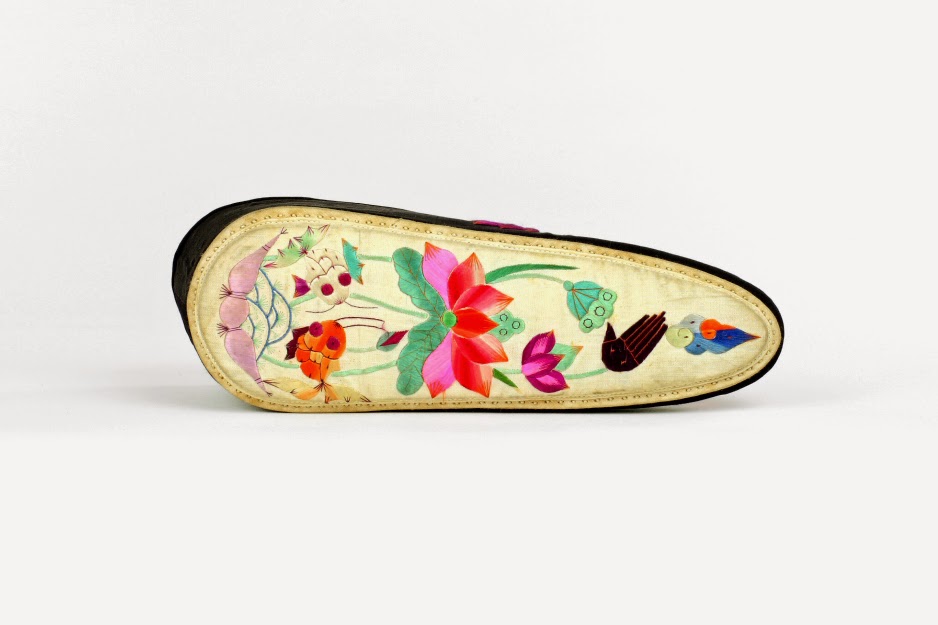 The lotus flower, a symbol for summer, purity and fruitfulness was perhaps the most popular. Chinese characters, leaves, animals, fish and flowers were also used in embroidered decoration. The bottom of the shoes could be embroidered as well. As many wealthy women spent their days sitting with their feet up, it was important that the bottom of the shoes be just as attractive as the sides. 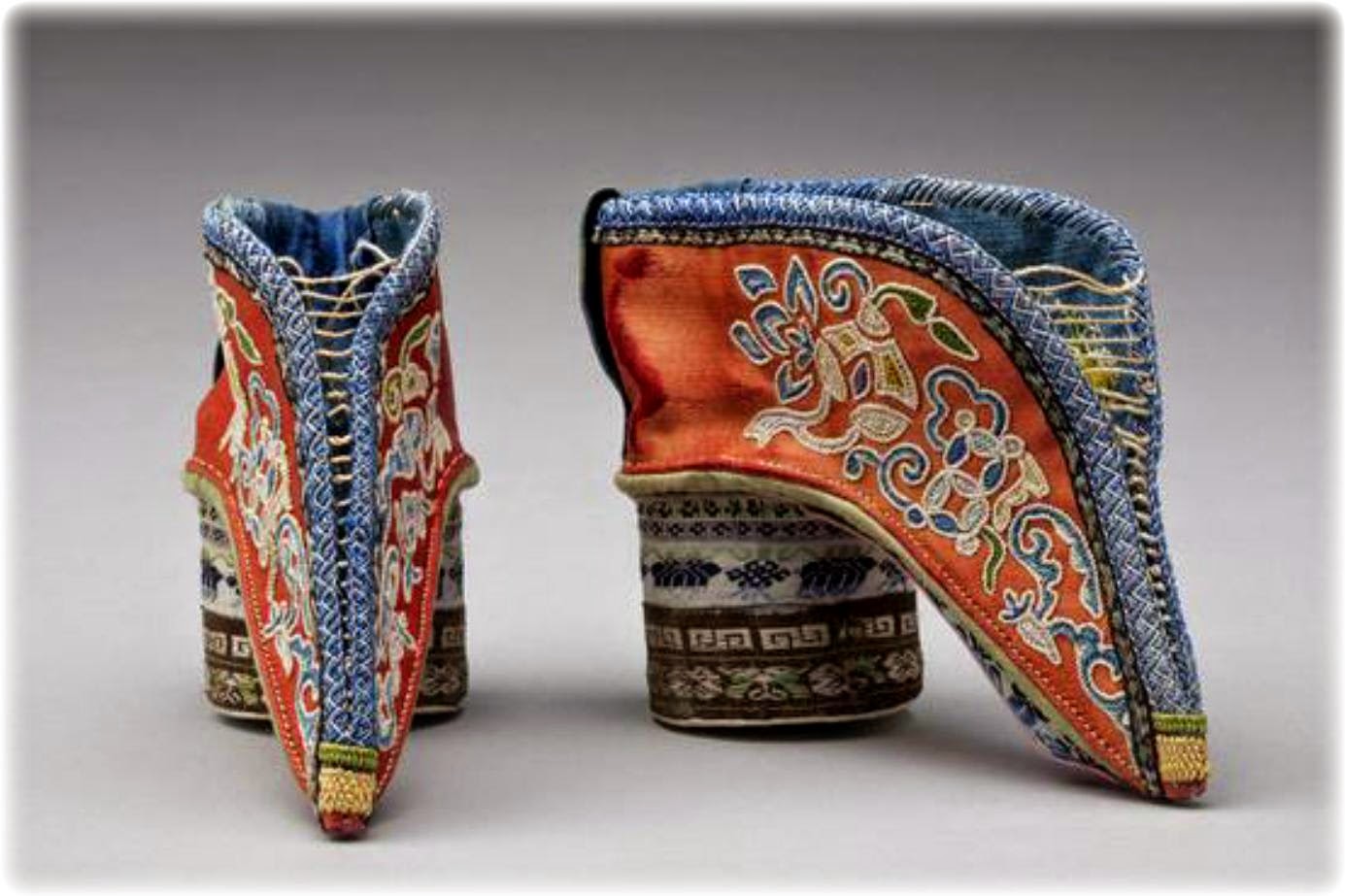 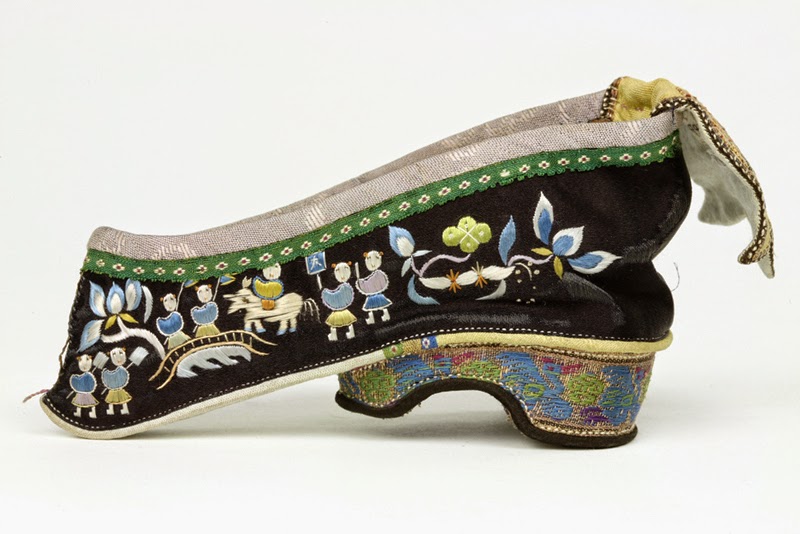 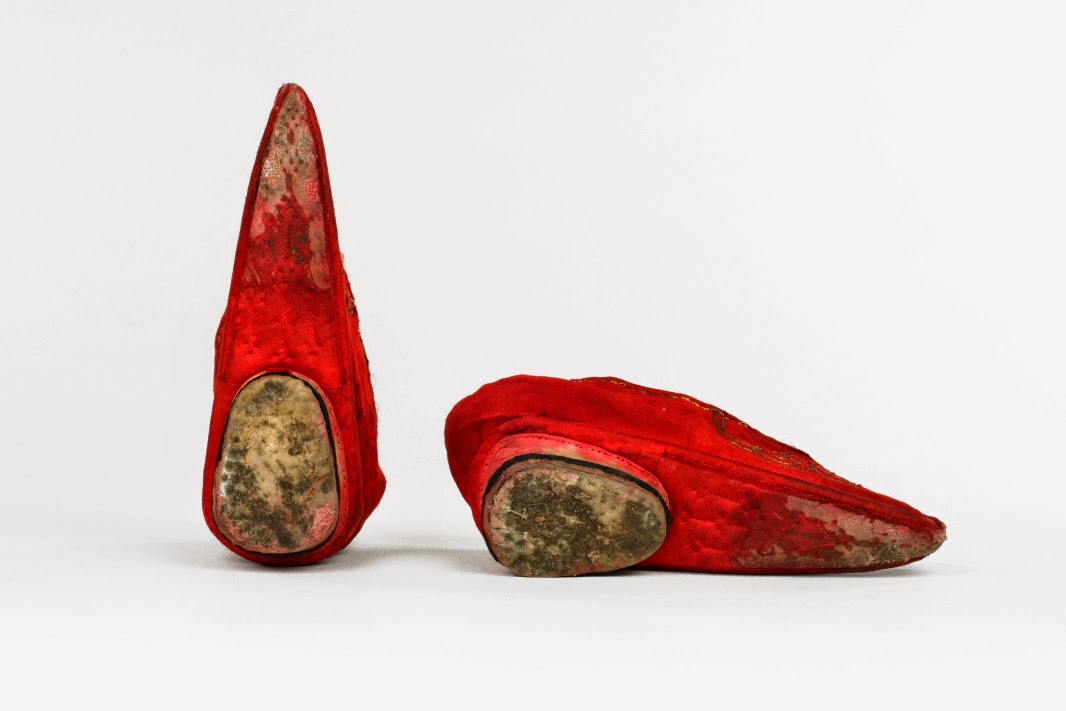 More slippers
unable to find credits for these 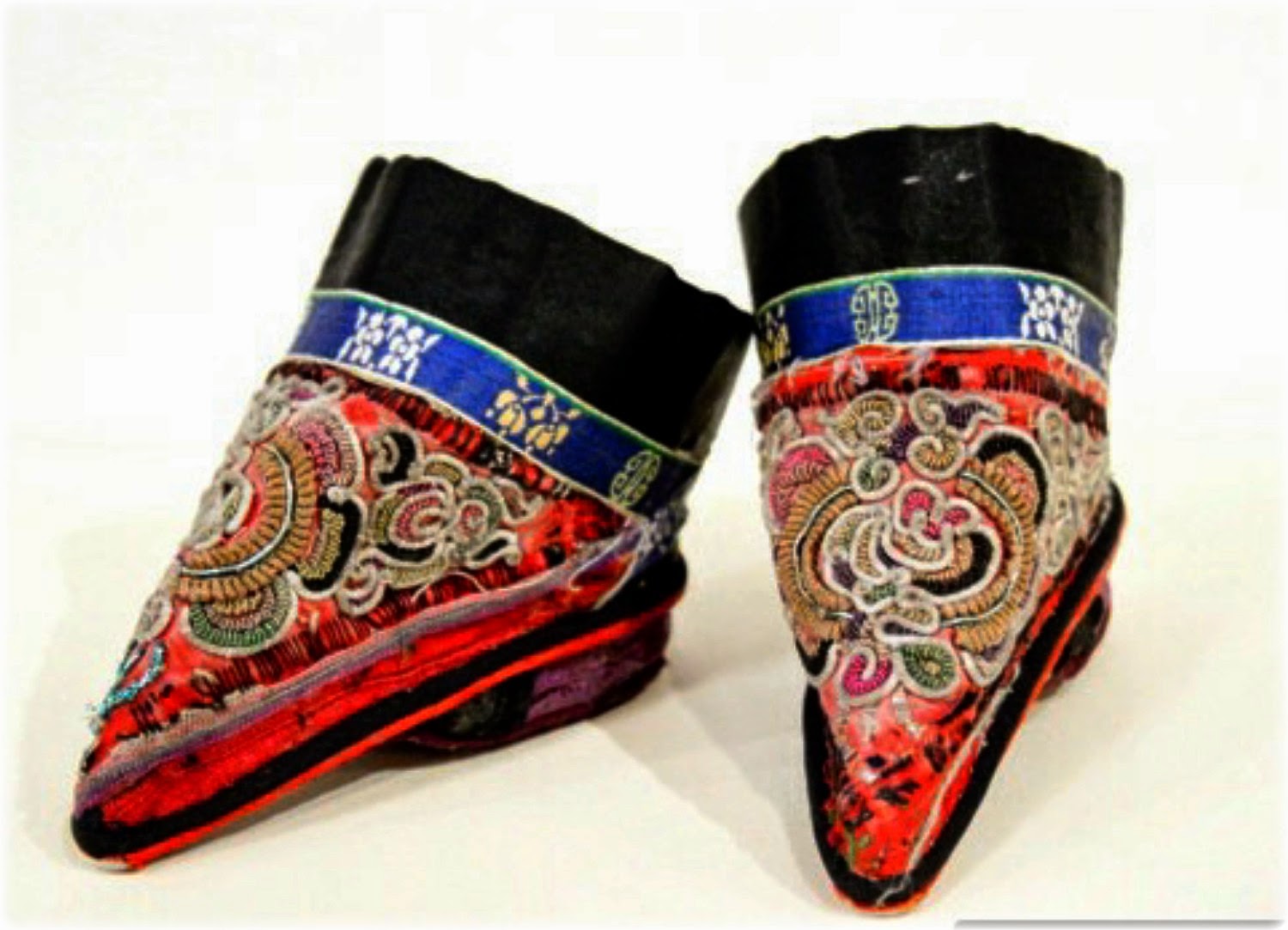 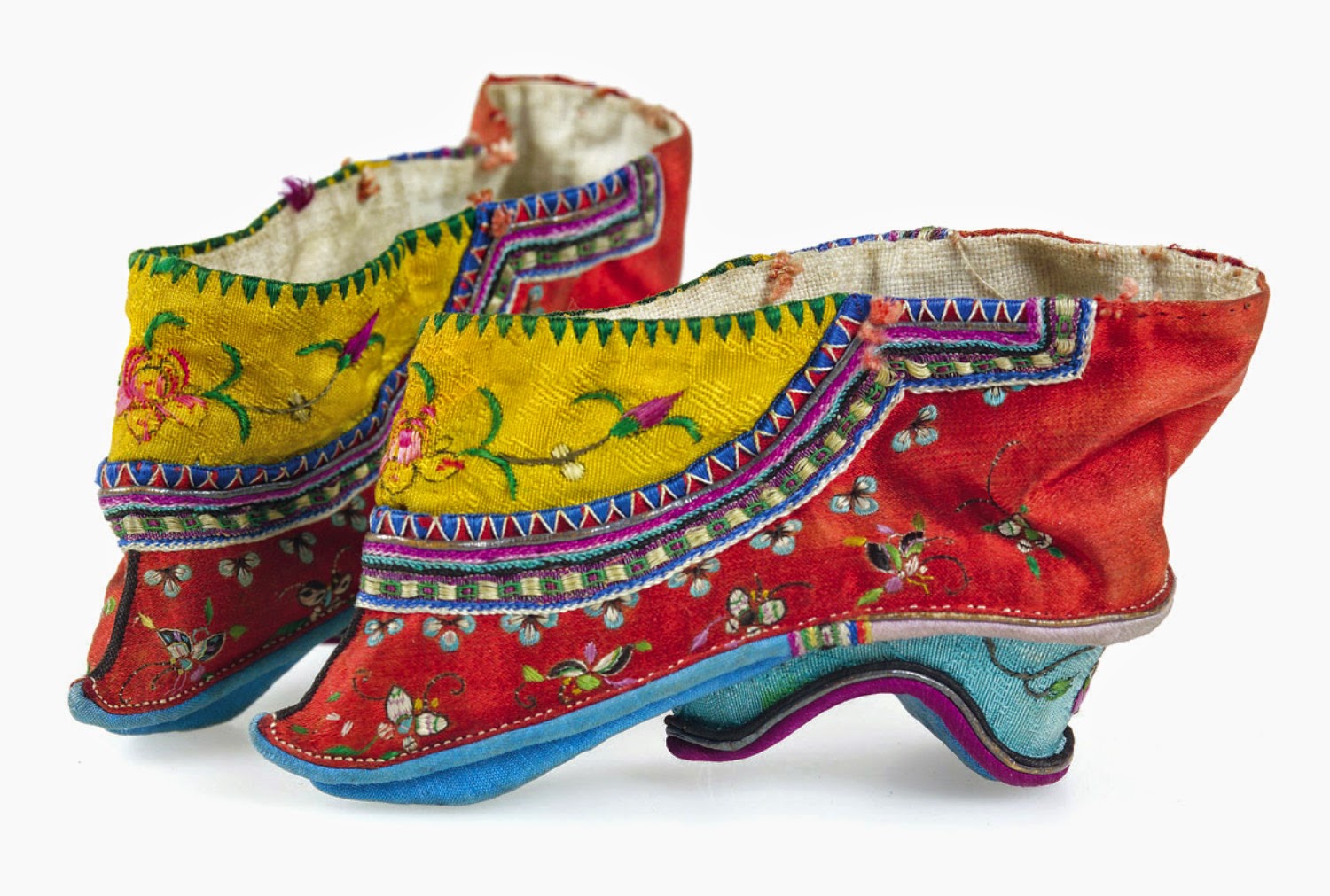 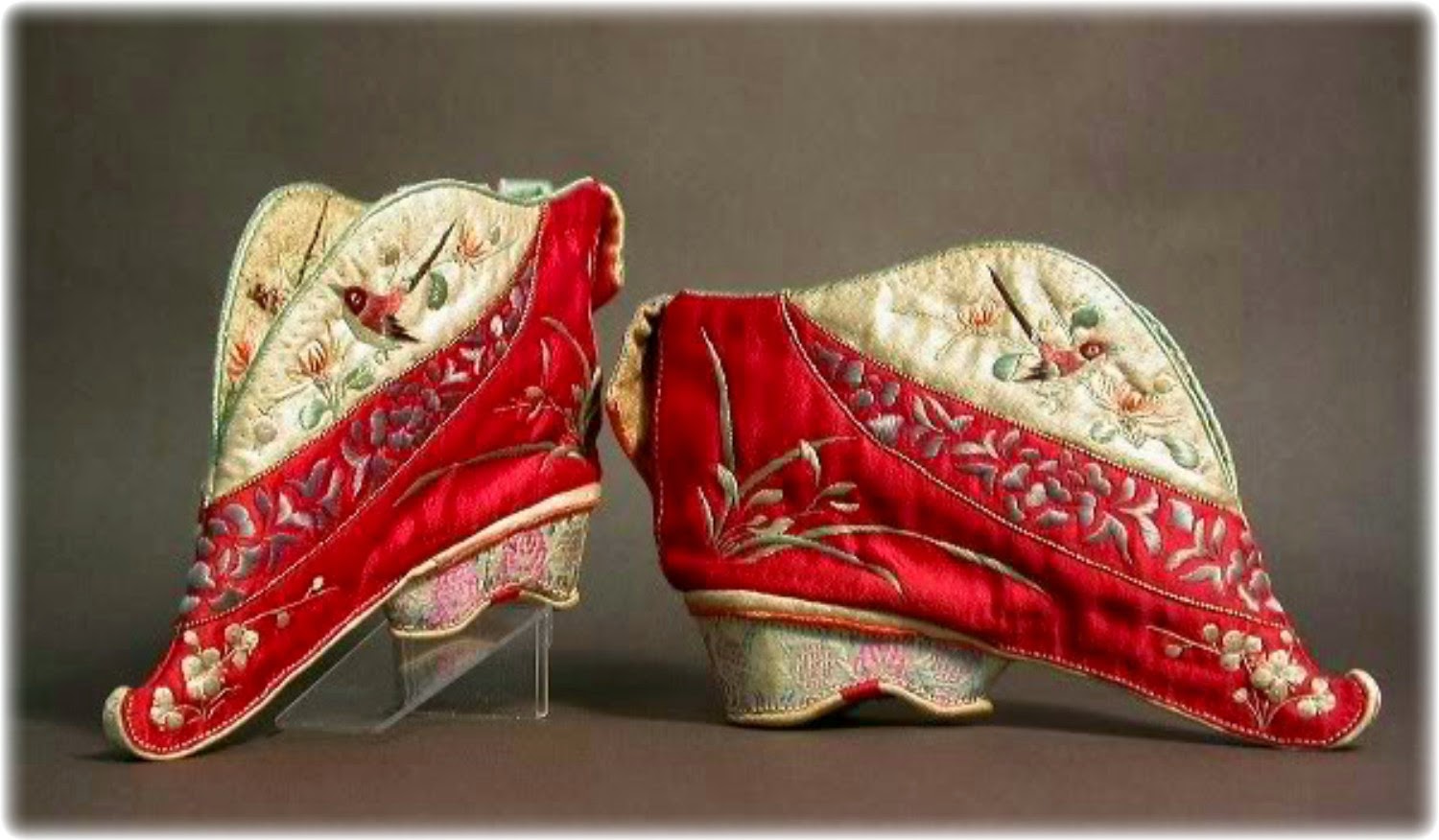 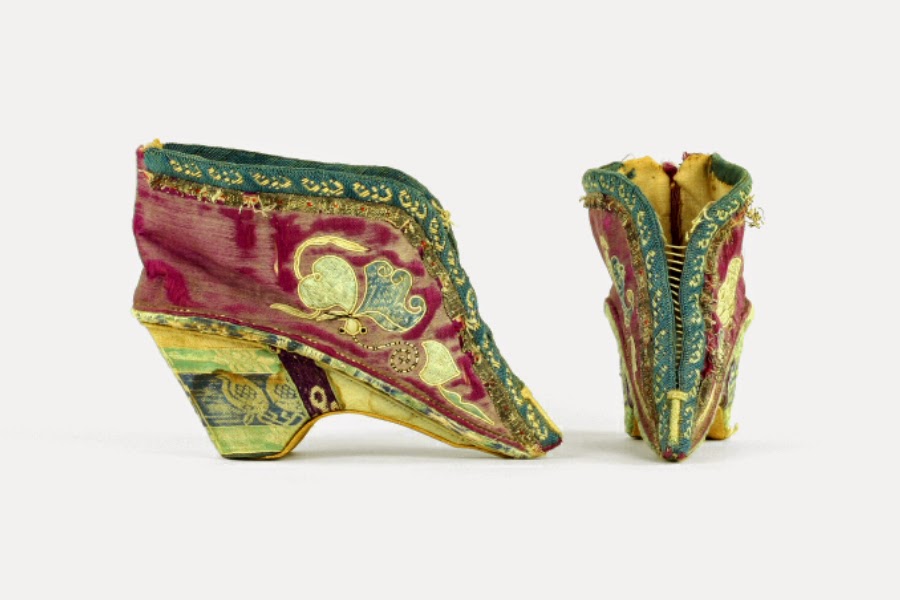 a well loved and worn pair

Manchu women did not bind their feet was in part because it they were ordered not to by the Emperor and other men, who saw their feet as a marker (the marker) of ethnic difference. They were also able to gain all the benefits of footbinding, a visible symbol of their refinement and culture, without having to bind their feet.

“Those who imitate the clothes of another country or order their women to bind their feet, [they] have their bodies in our dynasty but their hearts in another country.” 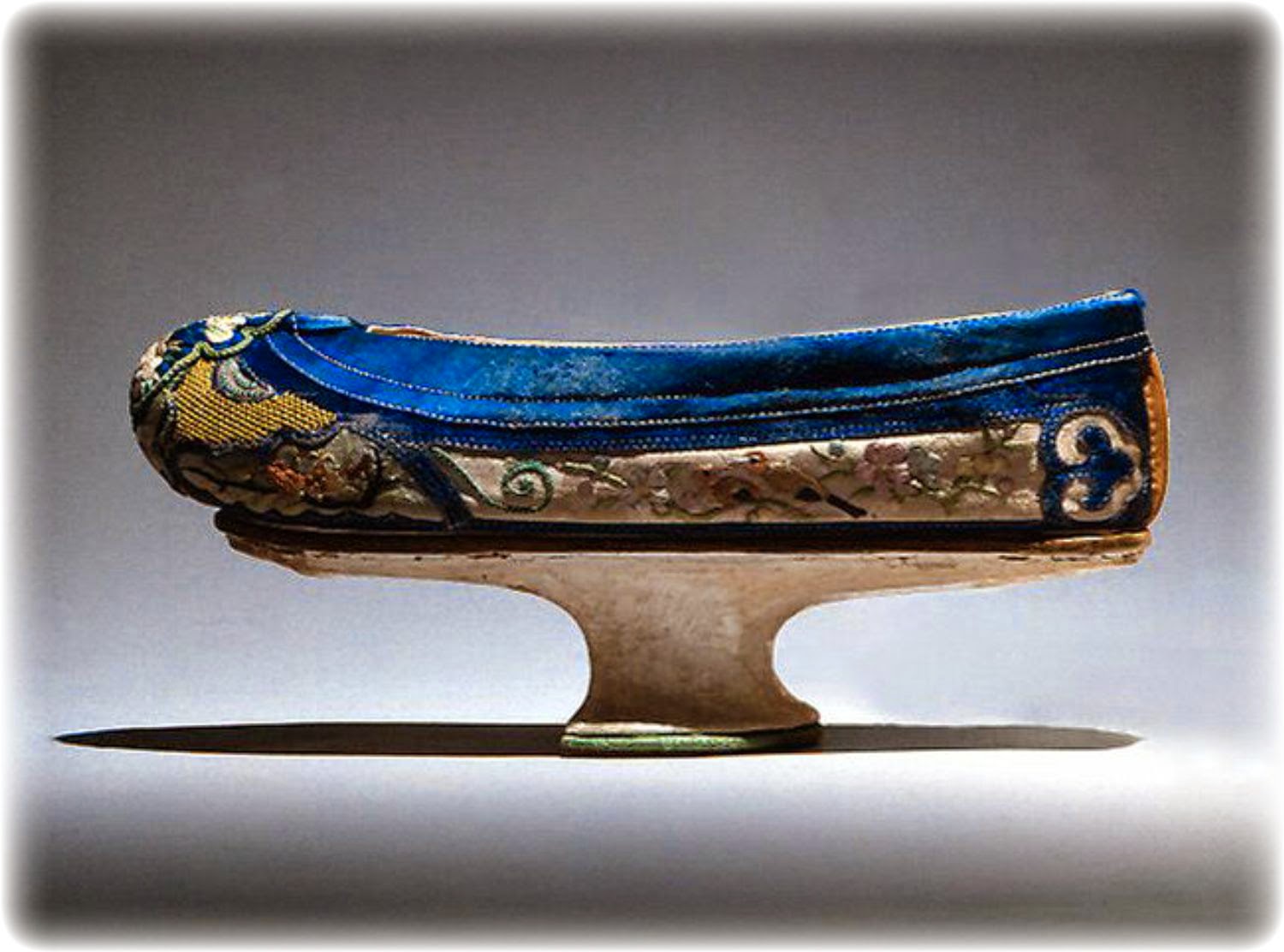 Manchu women were forbidden to bind their feet by an edict from the Emperor after the Manchu started their rule of China in 1644. However, few complied with the edict. As its prevalence increased, the Manchus, wanting to emulate the particular gait that bound feet necessitated, invented their own type of shoe that caused them to walk in a similar swaying manner. These "flower bowl" shoes sat on a high platform generally made of wood, or had a small central pedestal. Bound feet became an important differentiating marker between Manchu and Han women. 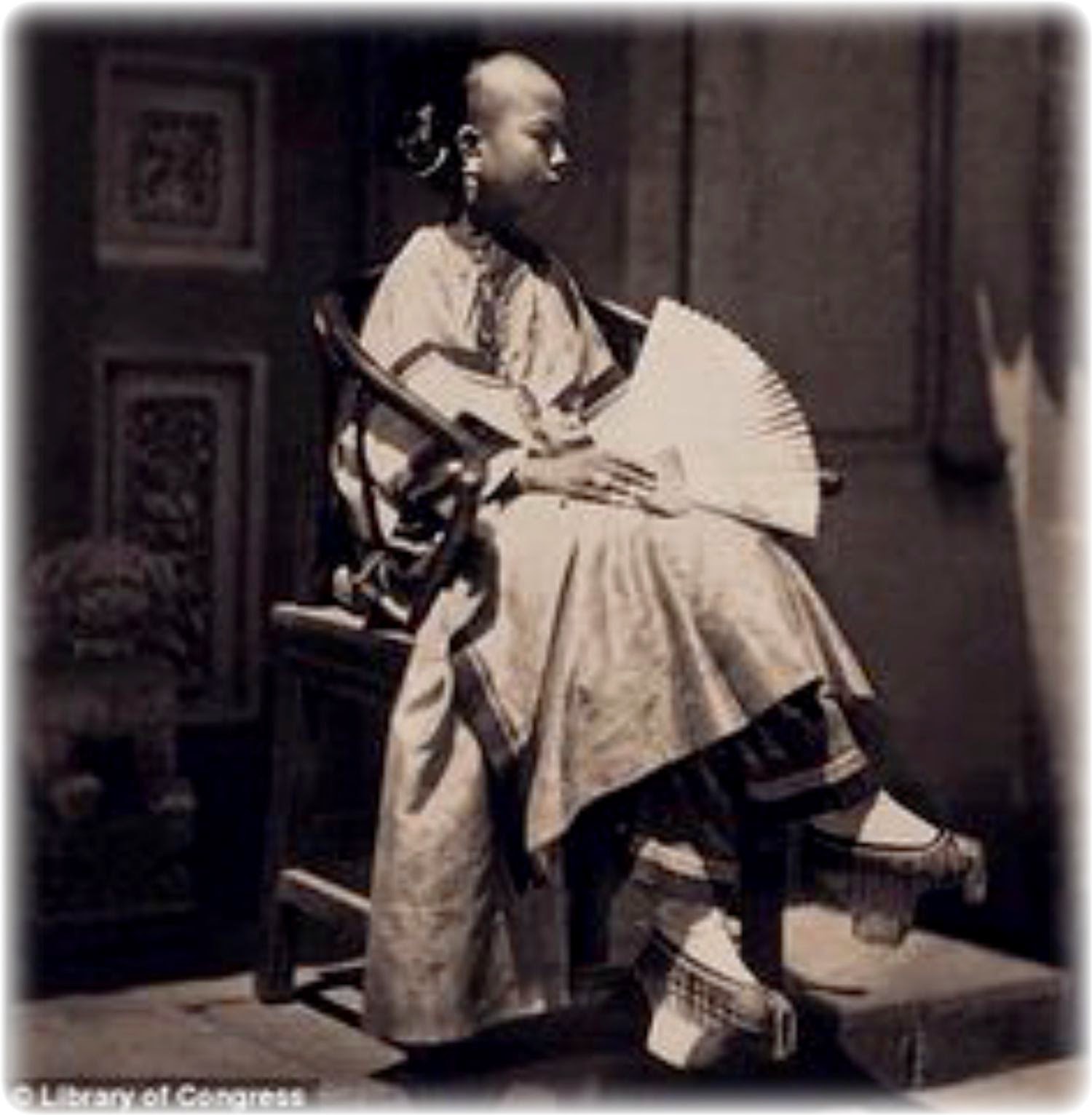 A Manchu girl shows off the dress typical
of the ruling Qing dynasty.
The picture is from the mid nineteenth-
century collection of William Lockhart 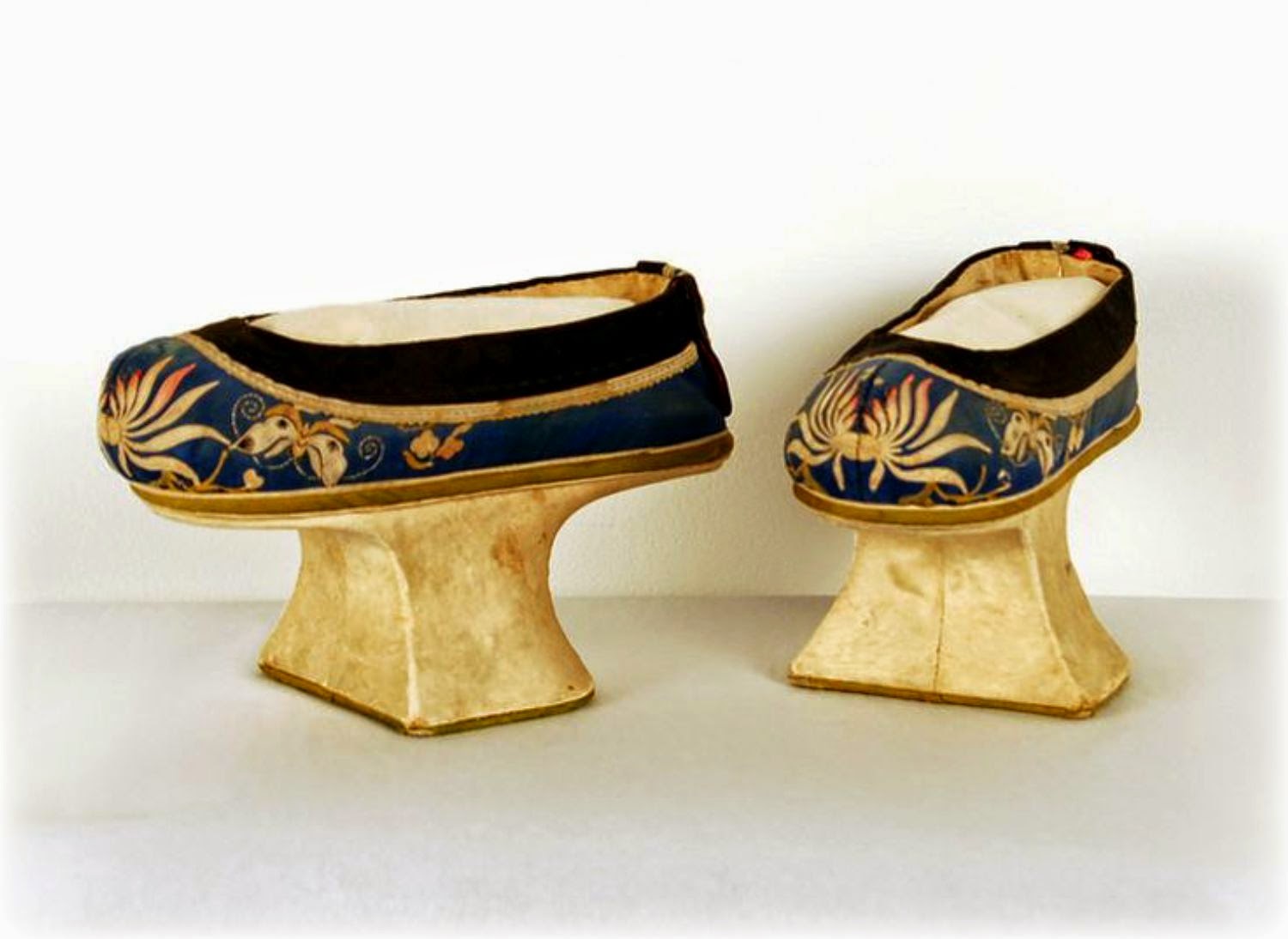 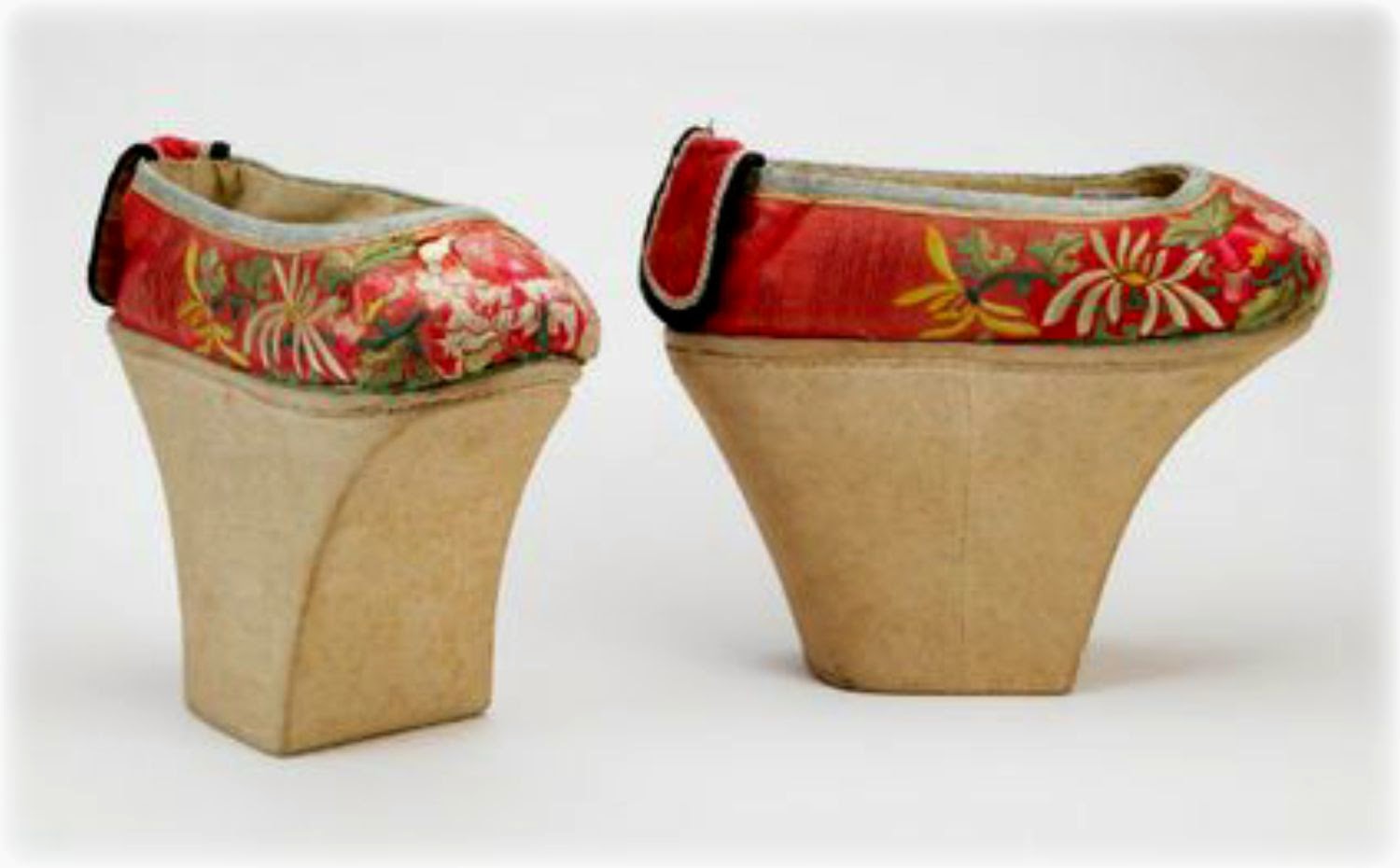 My hope is that gives you a glimpse into the Chinese culture and their thought process of that time on history!

I love art, and I love history,
but it is living art and living history that I love...