Hats- From the Land


This is  my last of this series of postings on my Story Hats. I hope that you have enjoyed these hats as much as I have love sharing these stories with you, my dear readers.

There will be more to my Story Hats coming in the next year! 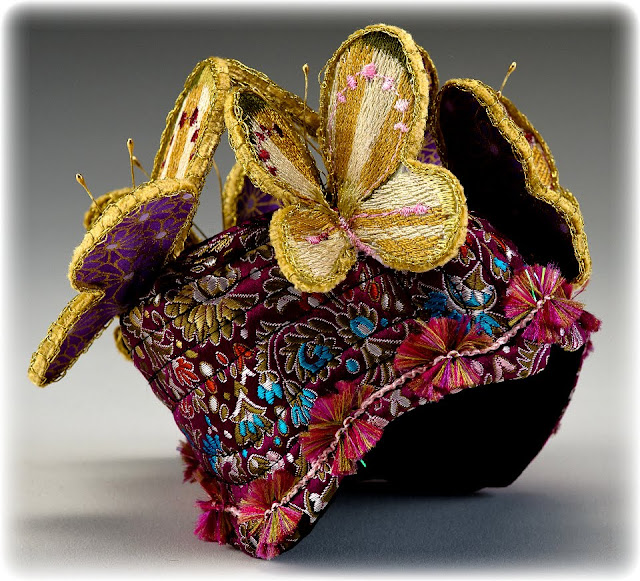 In the Chinese culture, the butterfly is symbolic of the undying bond as each mirrored wing is connected in the middle at the heart. As Butterflies float from flower to flower, this represents a good social life for the young at heart, joy, and the essence of happiness. The Chinese give a jade butterfly as a gift to newlyweds. It is their belief that a butterfly symbolized a wedding of souls. 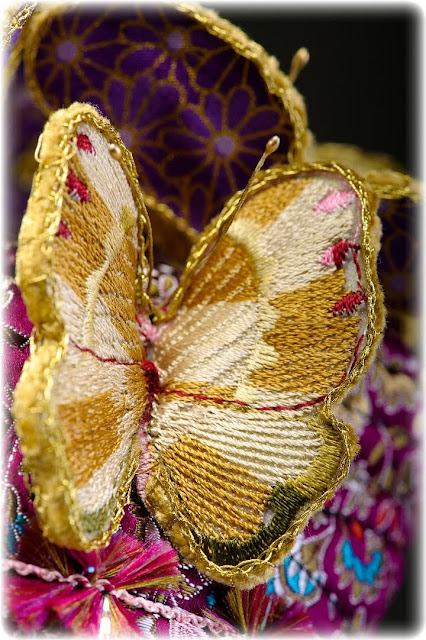 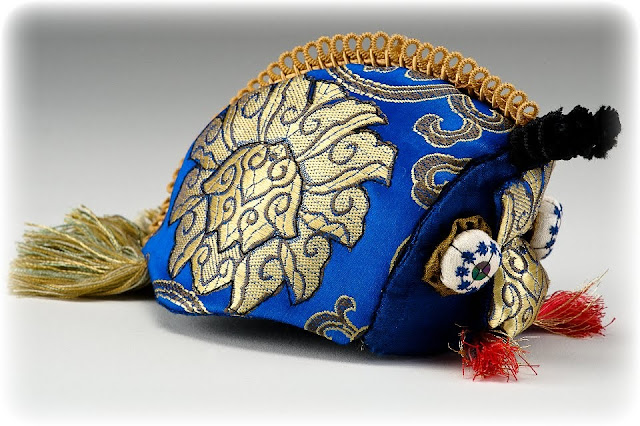 The Chinese dragon traditionally symbolizes potent and auspicious good fortune. It is also a symbol of power, strength, and good luck with protective qualities against evil.

There are four types of Chinese Dragons. These include the Celestial, Spiritual, Earth, and Underworld dragons. The Celestrial Dragon is said to protect the Gods and palaces in which the God’s live. The Spiritual Dragon controls the rain and wind. The Earth Dragon is in charge of all the water and rivers on the Earth and the Underworld Dragon guards all the precious gemstones and metals. 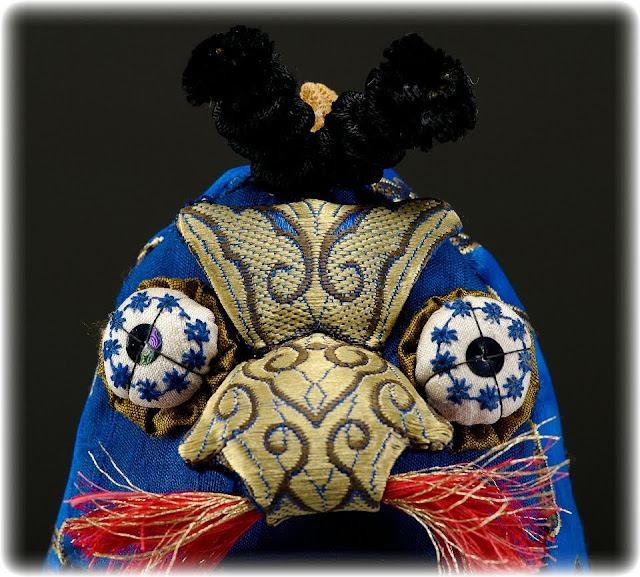 As you can see, I have chosen this below image of one of my Dragon hats to be my header. I love the below meaning as I interpret it to mean that the dragon can go anywhere- from the heavens to the seas- that is where I believe my hats belong- with you giving you a story, a reassurance and protection- wherever you are!

The Chinese Dragon is also the symbol of Mother Nature, which is the most important divine force on Earth. In addition, the Chinese Dragon means vigilance, divine protection and is seen as the Supreme Being across all creatures as is able to live in the seas, in the form of mountains, it can also fly up to the heavens and it also protects people against evil spirits. 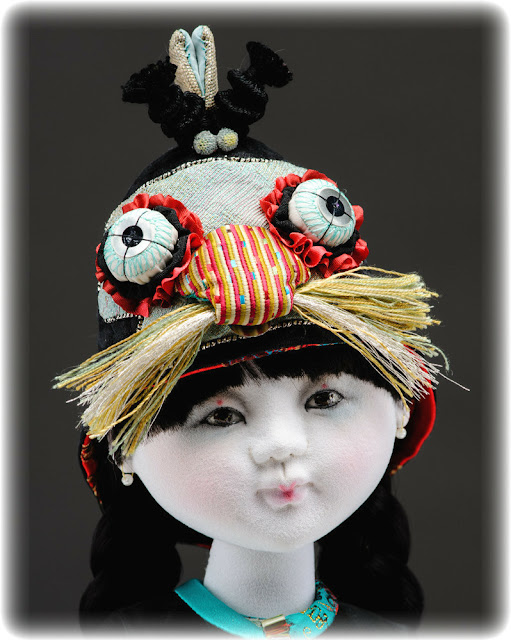 The Dragon is male and needs a female balance- as the Phoenix. So, I fussy cut the two of the Dragons (mirrored) for the sides and one of the Phoenix for the front to fit within my Dragon hat. 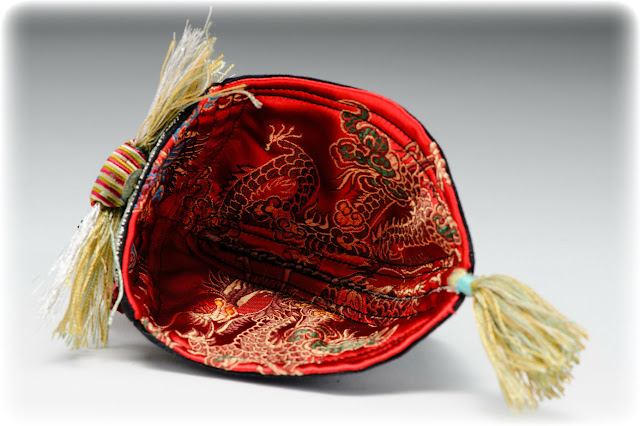 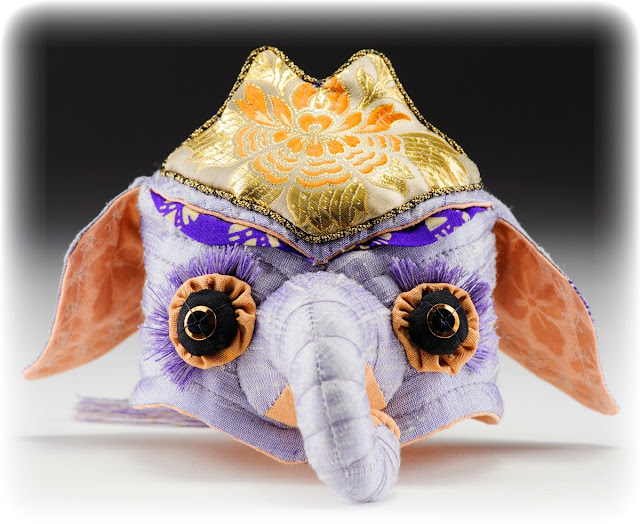 The Elephant 象is a symbol of stability, strength and wisdom. The word for Elephant in Chinese is pronounced and written the same as the word for “sign” or “things to come”. Some Asian cultures also believe the elephant is a cosmic creature, and carries the world upon it's back. The elephant also has immense determination and loyalty - always standing up for others and always defending members of the group in its natural habitat. Elephants also express advanced sensitivity and social connection. 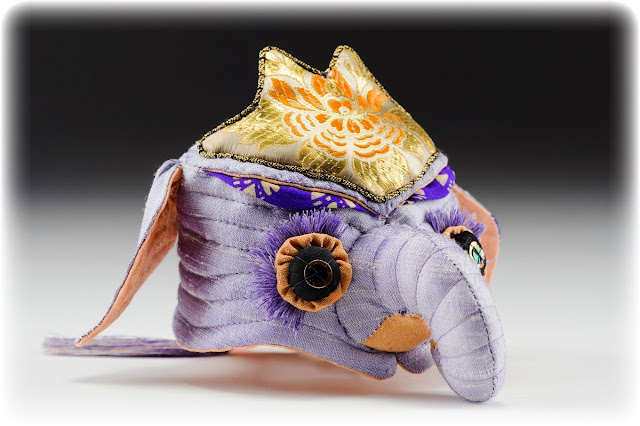 Detail of the Elephant.
Each embellishment is hand-made...even the fringe-y eyelashes!
Crown is from Chinese silk brocade trimmed
with vintage metal cording. 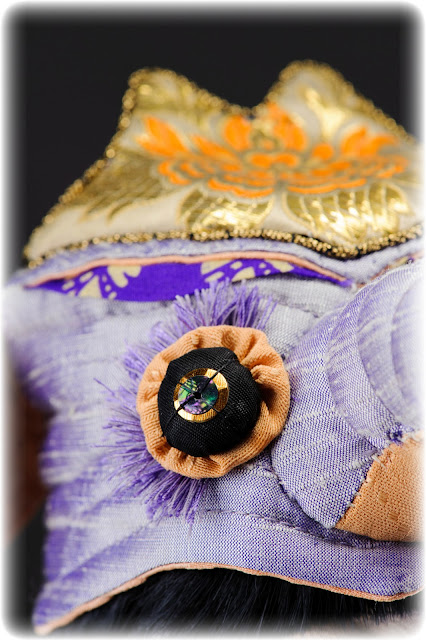